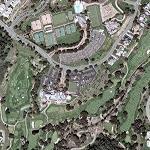 By AKpilotEMT @ 2005-12-09 16:39:36
@ 34.1317, -118.883615
Westlake Village, California (CA), US
This is a gorgeous course tucked into a small, mountainous valley. The club has such members as Jack Nicholson, Sean Connery, Wayne Gretzky & Tom Selleck. It's the site of a Tiger Woods golf tournament every year. Sherwood got its name from the valley which got its name from the nearby lake which got its name from a movie that was filmed around the lake and the valley, a little picture starring Douglas Fairbanks called Robin Hood.
Links: www.scctemp.com
4,892 views