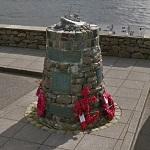 The crews would dress as fishermen and use the cover of darkness to ferry British soldiers and civilians caught in Norway. Darkness on the North Sea was very hazardous not to mention the patrolling German boats and planes. Several boats and crews were lost in the first three years, but that all changed when three submarine chasers (Vigra, Hessa and Hitra) were introduced.
Links: en.wikipedia.org
251 views