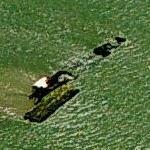 The keel of the Thompson was laid down on 25 September 1918, at San Francisco, California, by the Bethlehem Steel Corporation. She was launched on 15 January 1919.

Under the terms of the 1930 London Naval Treaty limiting naval tonnage and armaments, Thompson was decommissioned on 4 April 1930, struck from the Naval Vessel Register on 22 June 1930; and sold for scrap on 10 June.

Following her sale, she served as a floating restaurant in lower San Francisco Bay during the depression years of the 1930s. In February 1944, the Navy repurchased the ship and partly sank her in the mud flats of San Francisco Bay, south of the San Mateo Bridge, where Army and Navy aircraft carried out bombing runs with dummy bombs.

Portions of the wreck remain above the waterline to this day. She is commonly referred to as the "South Bay Wreck" and many tide tables reference her as a calculation point.
Links: en.wikipedia.org, 0aaefd72d27128915484aa92542b16b656fba01b.googledrive.com
16,028 views