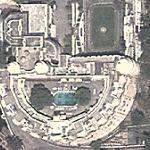 Located to the south side of and part of the City Palace complex, work on this building was begun by Maharana Sajjan Shambhu Singh (1874 to 1884) and finished by his successor Maharana Fateh Singh at the beginning of the 20th century as a royal guesthouse.

During its time as a guesthouse it hosted a number of royal gatherings and VIP visits from all over the world, including George V of the United Kingdom in 1905, and Edward the Prince of Wales.

By the time that Bhagwat Singh succeeded to the throne of Mewar in 1955, it was becoming increasing difficult for the royal family to afford the cost of maintaining the large numbers of royal residences that they owned, in particular the city palace. Following his success in converting the Lake Palace into an income generating hotel he decided to also convert the Shiv Niwas and the smaller Fateh Prakash Palace into luxury heritage hotels. After a 4 year long period of conversion the Shiv Niwas opened as a hotel in 1982.

The palace was featured in the James Bond movie Octopussy.
Links: en.wikipedia.org
335 views