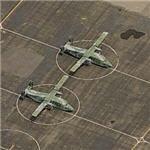 The C-23A Sherpa entered USAF service in 1985 and continuing in use in the EDSA role until 1990, when the EDSA role was disbanded. Six aircraft were passed to the United States Army, where they were used to support the Army National Guard, joining 10 new build C-23B Sherpa aircraft. Other variants are C-23B+ and C-23C. The C-23 replaced the UV-18 Twin Otter in U.S. service. The C-23 is the only cargo plane operated by the U.S Army.
Links: en.wikipedia.org, www.airliners.net
768 views