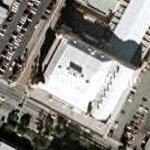 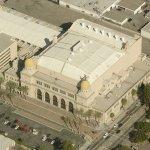 The Academy Awards show was first presented at the Shrine back in 1947.

From the outside, the Shrine Auditorium resembles an exotic Arabian mosque from ages past, or some west coast Taj Mahal, replete with white Persian domes and Moorish arches. Inside, it is a lush, old-fashioned opera house, with red velvet seats and tiered balconies overlooking its cavernous interior.

The auditorium's unusual architecture (inside and out) has made it a favorite movie location. The Shrine has been seen in the original "King Kong" (1933, with Fay Wray), the 1954 version of "A Star is Born" (starring Judy Garland), "The Turning Point" (1977, starring Shirley MacLaine and Anne Bancroft), the 1988 comedy "Foul Play" (with Goldie Hawn and Chevy Chase), "The Doors" (1992, starring Val Kilmer as Jim Morrison), and many others.

The concluding scenes of the 1994 slapstick comedy "Naked Gun 33 1/3: The Final Insult," had a bumbling Leslie Nielsen foiling an assassination attempt during an Academy Awards ceremony. The sequence included exterior shots of the stars arriving at that Shrine.
Links: www.seeing-stars.com, bigorangelandmarks.blogspot.com
1,040 views