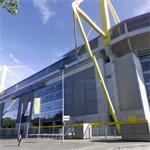 By neotrix @ 2010-11-18 14:08:24
@ 51.493871, 7.450281
Dortmund, Germany (DE)
The stadium is officially named Signal Iduna Park under a sponsorship arrangement lasting from December 2005 until June 2016, giving naming rights to the Signal Iduna Group, an insurance company. The older name Westfalenstadion derives from the former Prussian province of Westphalia, which is part of the German federal state North Rhine-Westphalia. It is one of the most famous football stadiums in Europe and was elected best football stadium by The Times for its renowned atmosphere
Links: virtualglobetrotting.com
1,368 views