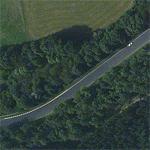 Fellow drivers Arturo Merzario, Guy Edwards, Brett Lunger, and Harald Ertl pulled him from the fire long before any safety workers would be able to reach him. Lauda suffered severe burns to his head and lungs and battled for his life in the following days. Remarkably, he returned to the cockpit six weeks later. He remains in the sport today working as a manager of the Mercedes AMG Formula One team.

Ron Howard's 2013 film "Rush" recreated the scene in the exact spot of the original accident. The film tells the story of the epic battle between Lauda and England's James Hunt.
Links: en.wikipedia.org
3,164 views