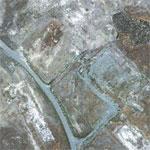 By kjfitz @ 2006-04-03 17:45:00
@ 43.517482, -112.822831
Idaho Falls, Idaho (ID), US
The SL-1, the Stationary Low-Power Reactor Number One, was a U.S. experimental military nuclear power reactor. It was destroyed in the first nuclear power plant accident in the United States. Part of the Army Nuclear Power Program, during design and build it was called the Argonne Low Power Reactor (ALPR). It was intended to provide electrical power and heat for small, remote military facilities, such as radar sites near the Arctic Circle, and those in the DEW Line. The design power was 3 megawatts (thermal). Operating power was 200 kW electrical, 400 kW thermal, for space heating. For testing it was located approximately forty miles (60 km) west of Idaho Falls, Idaho, in the National Reactor Testing Station.

At 9:01 pm on January 3, 1961, after a shutdown of eleven days for the holidays, and during maintenance procedures, the SL-1 went prompt critical. In four milliseconds, the heat generated by the resulting enormous power surge caused water surrounding the core to begin to explosively vaporize. The water vapor caused a pressure wave to strike the top of the reactor vessel. This propelled the control rod and the entire reactor vessel upwards, which killed the operator who had been standing on top of the vessel, leaving him pinned to the ceiling. The other two military personnel, a supervisor and a trainee, were also killed. The victims were Army specialists John Byrnes and Richard McKinley and Navy Electrician's Mate Richard Legg.
Links: en.wikipedia.org
9,813 views