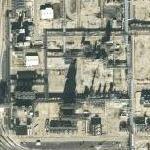 The incident started at approximately 1:00 PM local time on October 23, 1989, at 1400 Jefferson Road, Pasadena, Texas 77506. A massive and devastating explosion and fire ripped through the Phillips 66 Company's Houston Chemical Complex (HCC), killing 23 persons—all working at the facility—and injuring 314 others (185 Phillips 66 employees and 129 contract employees). In addition to the loss of life and injuries, the explosion affected all facilities within the complex, causing $715.5 million worth of damage plus an additional business disruption loss estimated at $700 million. The two polyethylene production plants nearest the source of the blast were destroyed, and in the HCC administration building nearly 0.5 mile away, windows were shattered and bricks ripped out. The initial explosion was equivalent to an earthquake registering 3.5 on the Richter Scale and threw debris as far away as six miles.

The accident resulted from a release of extremely flammable process gases that occurred during regular maintenance operations on one of the plant's polyethylene reactors. More than 85,000 pounds of highly flammable gases were released through an open valve. A vapor cloud formed and traveled rapidly through the polyethylene plant. Within 90 to 120 seconds, the vapor cloud came into contact with an ignition source and exploded with the force of 2.4 tons of TNT.
Links: en.wikipedia.org
1,241 views