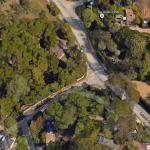 By Edison @ 2016-04-22 15:22:09
@ 34.111586, -118.3748015
Los Angeles, California (CA), US
The Northwest corner of Laurel Canyon Blvd. & Lookout Mountain Ave. is the former location of silent western star Tom Mix's log cabin home. Prior to that it was the location of the Laurel Tavern, dating back to the 1910s. The property is located across the street from Harry Houdini's former home.
The cabin's living room was overly spacious with a large fireplace, it included a one lane bowling alley in its basement.


From 1967-1968 the same cabin was rented by composer Frank Zappa as living and rehearsal space for a reported $700 per month. During this time it became a known hang-out for band member associates and L.A. based musicians. In 1968 Zappa vacated the cabin for a home he purchased on Woodrow Wilson Blvd.

The cabin mysteriously burned down on Halloween 1981, the lot has remained fallow since. The only remains of the cabin are its foundation.
Links: www.canyon-news.com
3,431 views