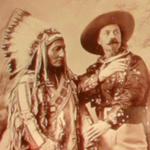 By adrbr @ 2013-02-12 05:51:49
@ 52.662801, -8.628173
Limerick, Ireland (IE)
Sitting Bull (Lakota: Tȟatȟáŋka Íyotake in Standard Lakota Orthography, also nicknamed Slon-he or "Slow"; c. 1831 – December 15, 1890) was a Hunkpapa Lakota Sioux holy man who led his people as a tribal chief during years of resistance to United States government policies. Born near the Grand River in Dakota Territory, he was killed by Indian agency police on the Standing Rock Indian Reservation during an attempt to arrest him and prevent him from supporting the Ghost Dance movement.


William Frederick "Buffalo Bill" Cody (February 26, 1846 – January 10, 1917) was an American soldier, bison hunter and showman. He was born in the Iowa Territory (now the U.S. state of Iowa), in Le Claire but lived several years in Canada before his family moved to the Kansas Territory. Buffalo Bill received the Medal of Honor in 1872 for service to the US Army as a scout. One of the most colorful figures of the American Old West, Buffalo Bill became famous for the shows he organized with cowboy themes, which he toured in Great Britain and Europe as well as the United States.
Links: en.wikipedia.org
780 views