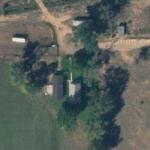 By forthefallendrms @ 2011-10-05 05:29:58
@ 40.258765, -109.887539
Ballard, Utah (UT), US
Skinwalker Ranch, formerly Sherman Ranch, is a 512-acre property southeast of Ballard, Utah, that is rumored to be a hotbed of paranormal and UFO activity. A book (Hunt for the Skinwalker: Science Confronts the Unexplained at Remote Ranch in Utah) and a History channel series (The Secret of Skinwalker Ranch) have been produced based on rumors and collected surveillance footage. Recording artist Post Malone visited the site in early 2021.

Terry Sherman and his wife Gwen moved their family to the ranch in 1995 but sold it for $200,000 after only 18 months due to mysterious events such as crop circles, UFOs, and mutilated cattle. The buyer, Las Vegas real-estate billionaire and UFO enthusiast Robert Bigelow, set up surveillance equipment around the property and investigated it for many years, leading to the book, but no meaningful physical evidence of any paranormal activity.

Bigelow sold the ranch for $4.5 million in 2017 to Brandon Fugal (using the shell company Adamantium Holdings), who changed the name to Skinwalker Ranch. After trademarking the name, all gates to the ranch have been blocked and the perimeter has been secured with cameras and barbed wire. Though the name is borrowed from Navajo legends of a malevolent shapeshifting witch, the ranch itself resides far from Navajo territory, instead bordering Ute reservation land.

The History channel series spans two seasons and eighteen episodes, with the most recent beginning in May of 2021. The show follows Fugal and a team of scientists and researchers who investigate mysterious animal deaths, underground tunnels, and possible interdimensional gateways.
Links: en.wikipedia.org, www.history.com, trademarks.justia.com, kutv.com
77,750 views