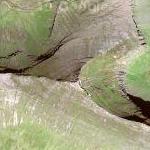 According to Guinness World Records Slættaratindur is the object of the world's longest sight line, 550 km from Vatnajökull, the largest glacier in Iceland. GWR state that "owing to the light bending effects of atmospheric refraction, Vatnajökull (2119m), Iceland, can sometimes be seen from the Faroe Islands, 340 miles (550km) away".
Links: en.wikipedia.org
1,015 views