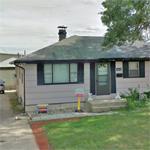 By milwhcky @ 2013-03-17 21:19:01
@ 41.695947, -86.2962
South Bend, Indiana (IN), US
On Sunday, March 17, 2013, a Beechair Premier I twin-jet experienced mechanical problems and crashed into a residential neighborhood near the South Bend Regional Airport. It hit two other homes before coming to rest inside the house seen in this Street View map. Two people were in this house during the crash, but they were unharmed.

The plane was registered to 7700 Enterprises of Montana LLC in Helena, Montana. Its flight originated from Tulsa, Oklahoma. A pilot reported hydraulic problems just before crashing.

Two of the four people on board the plane died, and one person on the ground was injured. Both of the deceased were licensed pilots. Preliminary reports have not determined who was at the controls at the time of the crash.

The men who died were the plane's owner, Wes Caves, and former Oklahoma University star quarterback Steve Davis. They were on a business trip for DigiCut Systems, a company owned by Caves.

Davis won two national titles for Oklahoma University in 1974 and 75. He was 32-1-1 as a starting quarterback, winning 28 straight games.

The neighborhood was evacuated due to the presence of jet fuel. Two of the three homes are planned to be demolished.
Links: www.southbendtribune.com
530 views