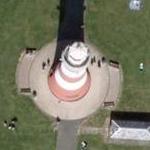 The Lighthouse was originally built on the Eddystone reef in 1759 at a cost of £40,000. John Smeaton used 1493 blocks of stone and 1800 Oak Trenails to build this engineering masterpiece which weighs in at 1000 tons.

Smeaton's Lighthouse now forms a centrepiece on the Hoe and has become one of the West Country's most well known landmarks. About two thirds of the structure built on the Eddystone reef was taken down in the early 1880's when the rock upon which it was standing was being undermined by the sea. The stump is still on the reef and can just be seen on a very clear day.

Now standing 72 foot high The Tower offers fantastic views from it's lantern room which, along with the rest of the building, has been painstakingly restored to it's original glory.
Links: www.plymouthdome.info
646 views