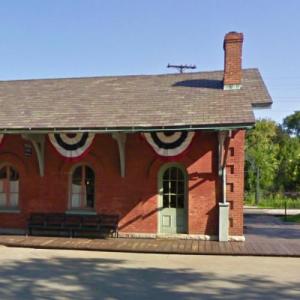 By Mike1989 @ 2012-11-18 07:40:21
@ 42.307182, -83.228474
Dearborn, Michigan (MI), US
Smiths Creek Depot was built on the Grand Trunk Railway in 1858 in Smiths Creek, Michigan nine miles southwest of Port Huron, and served both as a train stop and home to the stationmaster and his family. Like many small-town stations of its day, the railroad depot was a bustling center of travel, commerce, and communication. Smiths Creek Depot was more than a place to catch a train. The stationmaster, sold tickets and worked the telegraph machine. People could also mail packages and send telegrams.

As a boy during the Civil War, Thomas Edison worked as a trainboy out of this depot, selling newspapers and candy aboard trains to passengers traveling between Detroit and Port Huron, Michigan.