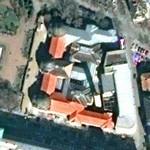 By Dania @ 2010-09-26 17:03:55
@ 42.699272, 23.324007
Sofia, Bulgaria (BG)
The Sofia Public Mineral Baths (Bulgarian: Софийска градска минерална баня, Sofiyska gradska mineralna banya) or the Central Mineral Baths (Централна минерална баня, Tsentralna mineralna banya) is a landmark in the centre of Sofia, the capital of Bulgaria, a city known for the mineral springs in the area. It was built in the early 20th century near the former Turkish bath (then destroyed) and was used as the city's public baths until 1986.

Public baths have existed in Sofia at least as early as the 16th century.
Links: en.wikipedia.org
458 views