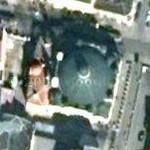 Constructed for the needs of the Bulgarian capital Sofia's mainly Sephardic Jewish community after a project by the Austrian architect Friedrich Grünanger, it resembles the old Sephardic synagogue Leopoldstädter Tempel in Vienna and was officially opened on 9 September 1909 in the presence of Tsar Ferdinand I of Bulgaria. The first preparations for the synagogue's construction date to 1903, while the construction itself had begun on 13 November 1905.

The construction of a grand new synagogue was part of the reorganization efforts of the Bulgarian Jewish community under Lemberg-born Chief Rabbi Marcus Ehrenpreis and local leaders Ezra Tadjer and Avram Davidjon Levy. Prior to the construction of the new synagogue, the lot in central Sofia had been occupied by an older synagogue.
Links: en.wikipedia.org
558 views