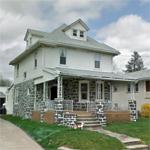 This was the home of the Solitano family. Pat Jr. (Cooper) is released from a court-ordered stay in a psychiatric hospital, returns to his parents' home, and tries to get his life back together. His father Pat Sr. (De Niro) and mother Dolores (Jacki Weaver) support their son and provide a bit of comedic charm to the film.

Filming took place in the Philadelphia suburbs in October and November 2011. It was nominated for eight Academy Awards, with Lawrence winning the Best Actress honors.
Links: en.wikipedia.org
1,296 views