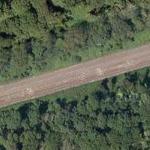 By kkeps @ 2012-11-26 20:39:25
@ 51.4626, -0.9084
Reading, United Kingdom (GB)
The Sonning Cutting railway accident occurred during the early hours of 24 December 1841 in the Sonning Cutting through Sonning Hill, near Reading, Berkshire. A Great Western Railway (GWR) luggage train travelling from London Paddington to Bristol Temple Meads station entered Sonning Cutting. The train comprised the broad-gauge locomotive Hecla, a tender, three third-class passenger carriages and some heavily-laden goods waggons. The passenger carriages were between the tender and the goods wagons.

Recent heavy rain had saturated the soil in the cutting causing it to slip, covering the line on which the train was travelling. On running into the slipped soil the engine was derailed, causing it to slow rapidly. The passenger coaches were crushed between the goods waggons and the tender. Eight passengers died at the scene and seventeen were injured seriously, one of whom died later in hospital.
Links: en.wikipedia.org
1,233 views