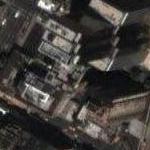 By Josema @ 2005-09-09 10:43:50
@ 40.764909, -73.983597
New York, New York (NY), US
Address: 259a W 55th St, New York, NY
Yev Kasem (a.k.a. the Soup Nazi) was a fictional character portrayed by Larry Thomas in the sitcom Seinfeld. The Soup Nazi was a stone-faced immigrant chef with a thick Stalin-esque moustache, who was well-known throughout the city for his delicious soups. He demanded that all customers in his restaurant follow his meticulous (and seemingly arbitrary) soup-ordering instructions to the letter, lest they be refused service by his insistent avowal, "No soup for you!" Some of the soups that he served were cold cucumber, corn and clam chowders, jambalaya, turkey chili, mulligatawny and crab bisque. He got his comeuppance when Elaine discovered his secret recipes. He made a brief cameo in the Seinfeld series finale.
Links: en.wikipedia.org
1,303 views