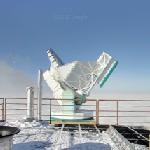 By Mike1989 @ 2012-07-17 04:00:55
@ -84.999999, -44.656316
Antarctica, Antarctica (AQ)
The South Pole Telescope (SPT) is a 10 metre (394 in) diameter telescope located at the Amundsen-Scott South Pole Station, Antarctica. The telescope is designed for observations in the microwave, millimeter-wave, and submillimeter-wave regions of the electromagnetic spectrum, with the particular design goal of measuring the faint, diffuse emission from the Cosmic Microwave Background (CMB). The first major survey with the SPT–designed to find distant, massive, clusters of galaxies through their interaction with the CMB, with the goal of constraining the Dark Energy equation of state–was completed in October, 2011. In early 2012, a new camera was installed on the SPT with even greater sensitivity and the capability to measure the polarization of incoming light. This camera is designed to measure the so-called "B-mode" or "curl" component of the polarized CMB, leading to constraints on the mass of the neutrino and the energy scale of inflation.
Links: en.wikipedia.org, www.google.com
791 views