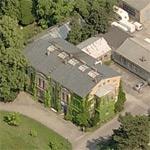 The arboretum was begun in 1879 by Franz Ludwig Späth, owner of the world's largest and oldest tree nursery (Späth nursery, founded 1720), when he expanded the garden around his 1874 villa. Berlin city gardener Gustav Meyer designed the arboretum in the style of an English garden. On Franz's death in 1913, ownership passed to his son Hellmut, who added a rock garden to the centre in 1928. The first arboretum catalogue published in 1930 listed almost 4,500 taxa.
Links: en.wikipedia.org
582 views