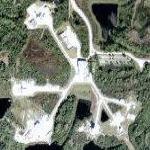 By kjfitz @ 2005-08-25 18:43:51
@ 26.904926, -80.380579
Jupiter, Florida (FL), US
A major facility for Pratt and Whitney, the aircraft and rocket engine company. This 7,000-acre installation is the company's principal military and space engine design, manufacture, test and repair facility, and has around 50 engine test stands. Major down-sizing in 1999 led to the closure of the military aircraft engine component of this facility, and the Palm Beach location is now known as the Space Propulsion Operations Headquarters. Pratt & Whitney is owned by United Technologies, of Hartford Connecticut.
631 views