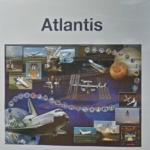 By kjfitz @ 2013-02-24 20:54:19
@ 28.585165, -80.648835
Cape Canaveral, Florida (FL), US
The Space Shuttle Atlantis (Orbiter Vehicle Designation: OV‑104) was a Space Shuttle orbiter in the Space Shuttle fleet belonging to the National Aeronautics and Space Administration (NASA), the spaceflight and space exploration agency of the United States. Atlantis was the fourth operational (and the next-to-the-last) Space Shuttle to be constructed by the Rockwell International company in Southern California, and it was delivered to the John F. Kennedy Space Center in eastern Florida in April 1985. Atlantis was the only orbiter which lacked the ability to draw power from the International Space Station while docked there; it had to continue to provide its own power through fuel cells.

The last mission of Atlantis was STS-135, the last flight of the Shuttle program. This final flight, authorized in October 2010, brought additional supplies to the International Space Station and took advantage of the processing performed for the Launch on Need mission, which would only have been flown in the event that Endeavour's STS-134 crew required rescue. Atlantis launched successfully for the final time on 8 July 2011 at 16:29 UTC, landing at the John F. Kennedy Space Center on 21 July 2011 at 09:57 UTC.

Atlantis was named after RV Atlantis, a two-masted sailing ship that operated as the primary research vessel for the Woods Hole Oceanographic Institution from 1930 to 1966.
Links: en.wikipedia.org
520 views