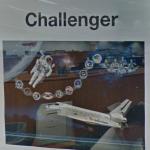 By kjfitz @ 2013-02-24 20:59:49
@ 28.58515, -80.648854
Cape Canaveral, Florida (FL), US
Space Shuttle Challenger (NASA Orbiter Vehicle Designation: OV-099) was NASA's second Space Shuttle orbiter to be put into service, Columbia having been the first. The shuttle was built by Rockwell International's Space Transportation Systems Division in Downey, California. Its maiden flight was on April 4, 1983, and it completed nine missions before breaking apart 73 seconds after the launch of its tenth mission, STS-51-L on January 28, 1986, resulting in the death of all seven crew members. It was the first of two shuttles (the other being Columbia) to be destroyed. The accident led to a two-and-a-half year grounding of the shuttle fleet, with missions resuming in 1988 with the launch of Space Shuttle Discovery on STS-26. Challenger itself was replaced by the Space Shuttle Endeavour, which first launched in May 1992 and was constructed from structural spares that had been ordered by NASA as part of the construction contracts for Discovery and Atlantis.
Links: en.wikipedia.org
572 views