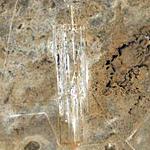 The receiving station at Elephant Butte is considered to be a "High Altitude" station with longer and more complex antenna systems that are designed to see targets at higher altitudes than the other four receiving stations.
Links: en.wikipedia.org
854 views