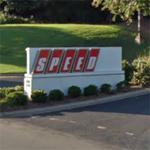 By milwhcky @ 2012-11-23 14:57:47
@ 35.314632, -80.765975
Charlotte, North Carolina (NC), US
Speed broadcasts an assortment of motorsports programming on cable and satellite systems across America. It is owned by News Corporation and operates on the Fox sports platform. All studio programming is filmed at this location.

When it launched in 1996, the network was named Speedvision. In 2002, it became Speed Channel. Eventually, the name was simply shortened to Speed.

Reports have surfaced that the channel will soon be reconfigured by Fox to become a generic sports channel to compete with NBC Sports Network and the ESPN family of channels.
Links: en.wikipedia.org
640 views