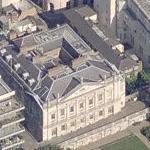 Spencer House was built in 1756-66 for John, first Earl Spencer, an ancestor of Diana, Princess of Wales (1961-97). Situated in the heart of St James's, Spencer House is a short distance from St James's Palace, Buckingham Palace and the Palace of Westminster, and has a splendid terrace and garden with magnificent views of The Green Park.
1,366 views