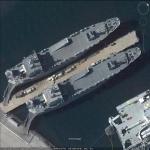 Both ships are maintained here at their Long Beach layberth in ROS-5 status, meaning they can be ready for deployment in 5 days or less. Both ships were activated and deployed in early 2007 and trasported cargo and vehicles for the US Army's 81st Armor Brigade to Kuwait as part of Operation Iraqi Freedom.
Links: www.globalsecurity.org
813 views