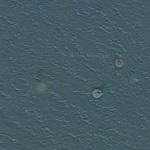 By tallturtle82 @ 2015-12-10 11:17:19
@ 51.464525, .7844741
Sheerness, United Kingdom (GB)
The SS Richard Montgomery is a wrecked Liberty ship built during WWII that went down with about 1,500 tons of explosives aboard. The ship ran aground on August 20, 1944 after the harbor master ordered the ship to make berth near a sandbank. The anchor was set, but dragged, allowing the ship to strike the sandbank. The ship cracked and much of the cargo was unloaded minus unexploded ordnance. Since 1944 the Montgomery has been placed in an exclusion zone and monitored on radar by the Maritime and Coastguard Agency.

Full disclosure, this is as close as I could get to mapping the wreck.
Links: en.wikipedia.org, www.dailymail.co.uk
3,739 views