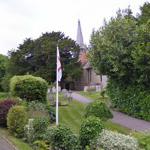 Its close proximity to the RAF base meant that service personnel killed on or near the base were regularly buried within the church's cemetery. There are thirty nine Commonwealth burials of the 1939-1945 War, all airmen, one of whom is unidentified. There are thirteen German Air Force burials here, one of whom is unidentified. The majority of these airmen were killed during the Battle of Britain. Today, all of these graves are tended to by the Commonwealth War Graves Commission, with the Commonwealth war graves grouped in three rows on the western side of the church, and beside them the German graves.
Links: en.wikipedia.org
675 views