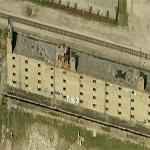 Today, it serves as a haven for squatters, graffiti artists and urban explorers. It had previously served as the "headquarters" for Homeward Bound (HoBo) University, run by a man named "Jeremiah the Amish Hobo." The "University" was in operation from fall 2009 through winter 2010.

The location has also served as the meeting ground for artist expo "Artica," an annual art shot held in December.

Currently, the land immediately east of the building is filled with dirt from the new bridge that is being constructed north of St. Louis. Around a dozen or so homeless people reside in a "tent city" in this area as well.
Links: dnr.mo.gov
1,295 views