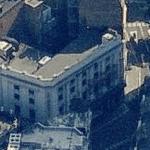 Bertie Meyer, who was so closely involved in the St Martin's in the early days, ran the theatre intermittently from 1916 to 1967, when his son R.A.(Ricky) took over. Ricky was the administrator for twenty years until his retirement in 1987; he remained as a consultant until his death in 1991.

Agatha Christie's "The Mousetrap" transferred in March 1974 - it is still there, now holding a World Record. The theatre was Grade II listed by English Heritage in March 1973
Links: www.arthurlloyd.co.uk
532 views