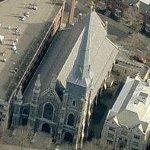 By WacoKidd110 @ 2011-03-17 11:00:21
@ 41.31214099, -72.92362617
New Haven, Connecticut (CT), US
St. Mary’s Church in New Haven was built by the first Catholic parish in the city and the second in Connecticut, founded in 1832 by the Irish Immigrant community. To express their growing influence, the Gothic Revival style church was constructed in 1870 on Hillhouse Avenue, New Haven’s most privileged neighborhood. The architect was James J. Murphy of Providence. A spire was originally planned, but not completed until just a few years ago. The Knights of Columbus, a Catholic fraternal service organization founded in 1882 and based in New Haven, originally met in the basement of the church.
Links: en.wikipedia.org
619 views