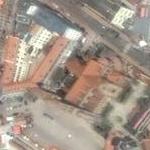 By kkeps @ 2010-07-11 20:10:17
@ 36.067972, 120.315611
Qingdao, China (CN)
St. Michael's Cathedral (Chinese: 圣彌格爾主教座堂; pinyin: Shèng mí gé ěr zhǔ jiào zuò táng) is a Catholic church in Qingdao (also known as Tsingtao), Shandong Province, China; it is also the seat of the Bishop of the Roman Catholic Diocese of Qingdao. It is located in the oldest part of Qingdao, at 15 Zhejiang Road, on the east side of Zhongshan Road in Shinan District. Built by German missionaries, the cathedral stands at the top of a hill in the center of the old German-built part of the city. It is the largest example of Romanesque Revival architecture in the province, resembling a German cathedral of the 12th century.

St. Michael's Cathedral is the product of a strong German presence in Shandong Province in the 19th and early 20th centuries. In the mid-19th century the European powers forcibly opened China to foreign trade. The Divine Word Missionaries built a church in the Jiaozhou Bay concession in Shandong in 1902, and in 1934 erected the cathedral, which remained nominally under their administration until 1964. In 1942 it came under the control of the Japanese Army, returning to Chinese control when the Japanese left Qingdao in 1945. In the early 1950s, all foreign missionaries, including the Bishop of Qingdao, were either imprisoned or expelled from China, and during the Cultural Revolution (1966–1976) the cathedral was defaced and abandoned. In 1981, it was repaired by the government and reopened for services, and in 1992 it was listed as a Provincial Historic Building by the government of Shandong Province.
Links: en.wikipedia.org
769 views