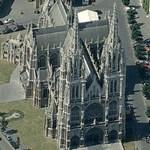 By DonMartini @ 2007-06-02 05:52:07
@ 51.22969, 2.921172
Ostend, Belgium (BE)
Saint Peter and Saint Paul's church. When visitors arrive in Oostende from the railway station their attention is immediately captured by the twin towers of the Saint Peter and Saint Paul's church. This neo-gothic church, built in 1904-1905, was designed by architect Delacenserie.The use of sandstone sets it apart from other churches in the Province of West-Flanders that are mostly entirely built with bricks. Inside the church is the mausoleum for Belgium's first queen Louise-Marie who died in Oostende in 1850. The stained-glass windows show the portraits of different Belgian Kings. Next to the church is an older tower (the 'Peperbusse') a remainder of the former church from the 18th century that stood here before it was destroyed by fire in 1896.The first stone of the tower itself was laid on July the 20th 1478. The tower now houses a small museum.
653 views