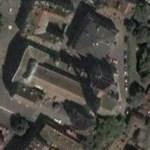 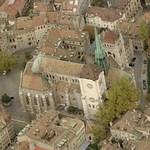 You will also be charmed by the Clémence, the queen of the bells, weighing over 6 tons and hoisted to this very tower in 1407.

The first phase of the cathedral’s construction dates back to the year 1160 and lasted nearly a century. Many events, including a series of fires, led to restorations and reconstructions, modifying its original design.

Then, in the middle of the 16th century, the advent of the Reformation, with its philosophy of austerity, upset the entire interior of the building.

All ornaments were removed and the coloured decors whitewashed. Only the stained glass windows were spared.

Its current neo-classic facade dates from the middle of the 18th century, having replaced the former Gothic one.
Links: en.wikipedia.org
624 views