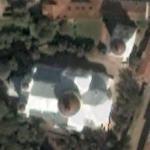 The church and the Orthodox monastery were built in this location by the brotherhood of the Holy Trinity in 1567. The brick church was erected in 1638 and reconstructed and decorated in the rococo style by the architect, J.K. Glaubitz, during 1749–1753. The simple massive bell tower adds to the calm and symmetric exterior of the church with its two early baroque towers and high (49 m or 161 ft) dome. Inside the building, there is a great deal of ornate décor from the 18th century. The wooden baroque iconostas, which was created in the late baroque style by J.K. Glaubitz, is especially valuable. The church's vaulting is adorned with a big copula and the fasade by two small towers. In 1826–1851, an underground crypt was installed under the iconostas for the burial of the remains of Saints Jonas, Eustchijus, and Antanas, who were the courtiers of Algirdas. At the initiative of Muravyov, the church was reconstructed: the dome was rebuilt and the facade changed significantly.
Links: www.turizmas.vilnius.lt
902 views