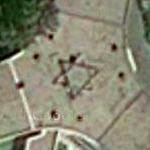 Regardless of whether it was happenstance or an act of architectural subterfuge, government officials in Iran were incensed this week when they discovered the outline of a Star of David atop the roof of the headquarters of Iran Air, Al- Arabiya reported on Monday.
Links: www.jpost.com
1,855 views