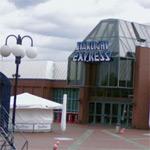 By neotrix @ 2010-11-18 13:51:20
@ 51.492209, 7.233034
Bochum, Germany (DE)
Starlight Express is a rock musical by Andrew Lloyd Webber (music), Richard Stilgoe (lyrics) and Arlene Phillips (choreography), with later revisions by Don Black (lyrics) and David Yazbek (music and lyrics for the 2nd US tour). The story follows a child's dream in which his toy train set comes to life; famously the actors perform wearing roller skates. It is one of the longest running musicals in West End history with 7,461 performances, but the Broadway production only ran for 761 performances. It is the most popular musical show in Germany.
Links: en.wikipedia.org
668 views