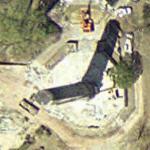 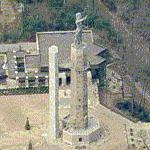 On the summit of Red Mountain, overlooking the heart of downtown Birmingham, stands a 56-foot statue of Vulcan, the Roman god of fire (aka God of the Forge). What is this pagan colossus doing on the virtual buckle of the Bible Belt?

Vulcan was sculpted by artist Giuseppe Moretti for steel town Birmingham as an exhibit for the Palace of Mines and Metallurgy at the 1904 St. Louis World's Fair. He was (and still is) the world's largest cast metal statue and the largest statue ever made in the U.S. His height was originally planned for 50 feet, but when Birmingham learned that a pagan Buddha in Tokyo stood 52 feet tall, they made their pagan Vulcan four feet taller.
Links: www.roadsideamerica.com
1,752 views