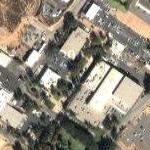 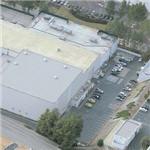 By kjfitz @ 2005-08-02 12:06:20
@ 34.457296, -118.57928
Santa Clarita, California (CA), US
The Rye Canyon corporate campus is located in a cul-de sac-against the hills for a good reason: it was built by the Lockheed Corporation for classified military work associated with the Stealth Fighter program. Mostly vacated by Lockheed now, the office park is part of a larger office park development, though Lockheed?s Skunkworks still uses the anechoic chamber building (Building 246) for secret military work. Other tenants are beginning to move in. The largest new tenant is a company called Advanced Bionics, which designs mechanical body parts such as the Cochlear implant.

The major use of the property however has been as a film location, marketed as a "multi-faceted film facility" by its developers, the Legacy Company. It frequently hosted the Mighty Morphin Power Rangers and other video-based television productions. Location scouts have commented that it looks more like Silicon Valley than anywhere else in Los Angeles. The offices and computer rooms in Building 34 - originally a "quiet building," designed to be impenetrable to external surveillance, as it housed design operations for new weapons systems - are favored as locations, and the old high bays in back, which once housed Stealth Fighter flight simulators, are often used as property shops. CBS TV has used this building as a location for a pilot for a proposed series called The Agency, about the FBI. The television show Crime Scene Investigators (CSI) used the site so much it set up production offices here. The series VIP has also shot here, and used Building 3 as a stand in for the CIA. The California Institute of the Arts (coincidentally also abbreviated "CIA") temporarily operated out of this office park after the Northridge earthquake.
Links: clui.org
4,884 views