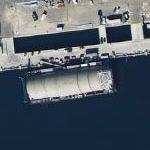 On November 4, 1982, the Associated Press reported that “the world's first fully submersible drydock, built as part of a CIA plan to raise a sunken Soviet sub, [was] being claimed by the Navy for a new secret project.�? The submersible drydock that the article referred to, called the HMB-1, for Hughes Mining Barge 1, was to be moved from the Todd Shipyards in San Francisco to Redwood City for a “Lockheed Missiles and Space Co. project ‘in which the Navy has an interest.’�?

The entire career of the HMB-1 had been synonymous with secret programs: it had been built through the Howard Hughes Company for the CIA to use in a top-secret mission to raise a Soviet Submarine that had sunk off the coast of Hawaii. Working in tandem with the Glomar Explorer ship, the HMB-1 housed a giant claw to raise the ill-fated sub, and the remains of the sub would stay hidden in the HMB-1 once it had been raised (note: the Speculative Archive’s film refers to these events). When the CIA mission was over, the HMB-1 was given to the National Park Service, who hoped to raise funds by leasing the barge out. But in 1982, the Department of the Interior ordered the barge handed over to the Navy for a new secret project.

SEA SHADOW was built in the mid-1980s by Lockheed in the Hughes Mining Barge (HMB-1) in Redwood City, CA. The vehicle is 160-ft. long, 70-ft. wide, displaces 560 tons and has a draft of 14 ft. It has a maximum speed of approximately 13 knots and is powered by a twin screw diesel electronic drive. The ship has a maximum speed of 14 knots and is capable of operating in Sea State 5 (extremely rough) conditions. The vehicle cost approximately $50 million to build and the total test program is approximately $195 million over roughly 10 years. It is owned by the Navy and operated by LMSC personnel.
Links: www.navysite.de
5,437 views