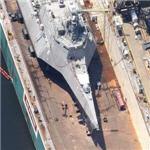 By kjfitz @ 2010-11-26 15:30:02
@ 36.834514, -76.292823
Norfolk, Virginia (VA), US
USS Independence (LCS-2), the class prototype for the Independence-class littoral combat ship, will be the sixth ship of the United States Navy to be named for the concept of independence. It is the design produced by the General Dynamics consortium for the Navy's littoral combat ship program, and competes with the Lockheed Martin-designed USS Freedom.

It is intended as a small assault transport that can take on various capabilities with the installation of mission modules. The ship is a trimaran design that can make more than 40 knots (74 km/h; 46 mph), and was delivered to the Navy at the end of 2009.
Links: en.wikipedia.org
3,671 views