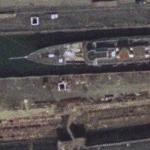 By Hinkkanen @ 2006-02-23 16:00:42
@ 53.420796, -3.000247
Liverpool, United Kingdom (GB)
Nahlin, one of the last three great steam yachts constructed in the UK, was built for Lady Yule in 1930. In 1936 Nahlin was chartered by the "Duke of Lancaster" who was actually King Edward VIII and used by him in the company of Mrs. Wallace Simpson during their love affair. The ship was sold to Romania in 1938 to be used by king Carol II and was renamed Luceafarul. Following the king's abdication in 1940 the ship remained the property of Romanian government and served as a passenger ship and later as a restaurant on river Danube and renamed Libertatea in 1948. In 1999 she was shipped to England aboard the heavy lift ship Swift. She was first laid up in Devonport and moved to Liverpool in 2003 to be restored under some secrecy. She has since been sold to Germany and shipped to Hamburg on heavy lift ship Condock V in July 2005. In 2001 she was rated as the 9th largest yact in the world by the Power & Motoryacht magazine.
Links: www.jhluxton.com
2,264 views