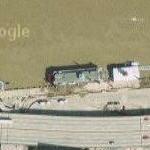 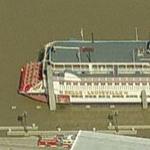 By kjfitz @ 2005-08-20 22:12:24
@ 38.25927, -85.75563
Louisville, Kentucky (KY), US
The steamboat now known as the Belle of Louisville first floated on the Allegheny River at Pittsburgh. She was built there by James Rees & Sons Company for the West Memphis Packet Company in 1914. Her original name was the Idlewild, and her sturdy, well-built frame sat atop a steel hull that needed only five feet of water to float. Such a shallow draft allowed her passage on practically every navigable waterway in the country - a feature she has used to its full advantage throughout her remarkable life.

In 1947, the Idlewild was sold to J. Herod Gorsage, and her name was changed to the Avalon the following year. The name change had been the deathbed wish of the boat's master, Captain Ben Winters, whose career had started aboard a different steamboat called the Avalon.

But by 1962, the Avalon was a sorry sight. In desperate need of major repairs and improvements, the boat was literally days away from the scrap yard when an auctioneer offered to put the doomed steamboat on the auction block. Her salvation came from Kentucky. At the auction, Jefferson County Judge/Executive Marlow Cook offered the highest bid. He bought the boat for $34,000 with county funds.
Links: belleoflouisville.org
635 views