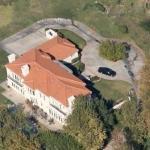 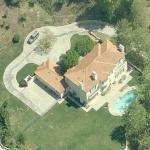 Chen purchased this 5,000-square-foot Bradbury Estates mansion in March 2014 for $4.48 million in cash, though the house was never actually used by him as a residence. Instead, it was occasionally used to conduct fundraising for his business but was otherwise left vacant.

In April 2015, according to the link below, Chen filed an application with the City of Bradbury to demolish the existing house and replace it with a 25,000 square foot mega-mansion, which would make it one of the largest homes in the city.

Though application and plans were accepted, the project appears to now be permanently on hold because Chen's bank accounts were frozen in October 2015 and this property was seized by the feds. It will likely be eventually sold at auction.

Chen and his current wife Luyang Li also own another even more expensive Bradbury Estates house just down the street (also featured on this site), where they are believed to still be living as of December 2015.
Links: www.cityofbradbury.org, behindmlm.com, www.sec.gov, www.latimes.com, www.valuewalk.com
1,588 views