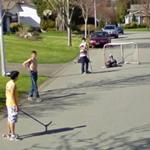 By adrbr @ 2010-11-02 14:23:51
@ 49.022686, -122.777609
Surrey, Canada (CA)
Street hockey (also known as road hockey, deck hockey, ground hockey, easy hockey, cosom hockey or ball hockey) is a type of hockey played on foot or with skates, usually on an outdoor surface (very often a street, parking lot, or other asphalt surface). It usually involves no contact and fairly small amount of gear to be worn. Depends on a persons preference to use certain gear like shin pads and such.

Internationally, the sport is governed by the International Street and Ball Hockey Federation.
Links: en.wikipedia.org
554 views